An Official Site of

Registration and Login for this system is through the "Innovate Ohio Platform" (IOP).

Please click the "Login or Register" button to be redirected. Once logged in on the platform, select the Tile for the "Ohio Liquor Permitting System." 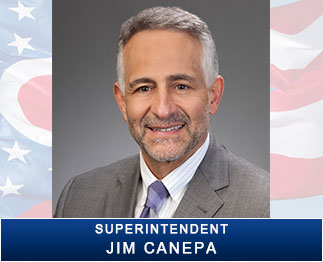 Jim Canepa is Superintendent of the Division of Liquor Control. He joined the division in February 2017 to provide project leadership for the Liquor Modernization Project (LMP), the state’s effort to modernize systems and processes across the liquor enterprise.

Under Canepa’s leadership, the division has replaced a 40-year-old inventory system with the Microsoft Dynamics AX system, added 17 new Liquor stores towards the goal of 20 by January 2019, reduced delisted inventory by 58% (75,418 bottles) since November 2017, and has started the process of enterprise-wide merchandise-category optimization with 125 of 465 Liquor stores scheduled to be re-set by October 2018.

Prior to joining the division, Canepa served as Chief of Staff and Legal Affairs for the Ohio Environmental Protection Agency. In this role, he managed the Agency’s Legal Affairs, regulatory compliance and enforcement, and criminal investigation and enforcement. He has served in numerous leadership roles in Ohio state government, including Chief Legal Counsel with the Ohio Department of Public Safety, Deputy Inspector General with the Office of the Ohio Inspector General and First Assistant Attorney General for the Ohio Attorney General. In these roles, he was responsible for overseeing legal affairs, complex projects and process improvements.

Canepa began his career with the Franklin County, Ohio, Prosecutor’s Office, where he served as an Appellate Prosecutor and a Senior Trial Prosecutor. In those roles, he defended felony convictions in the Tenth District Court of Appeals (Ohio) and the Ohio Supreme Court, and supervised and litigated felony criminals in trials in common pleas court, respectively.

Throughout his career, Canepa has been recognized for his exemplary work and was honored with the Outstanding Advocacy award from the National Association of Government Attorneys, the Caulley Award for Outstanding Victims Service and a Resolution of Recognition from the Office of Governor George V. Voinovich.

Every state in the country has an alcohol beverage control agency that regulates the manufacturing, wholesale distribution and retail sale of alcoholic beverages. There are no unrestricted free markets for alcohol sales in any state.

In Ohio, the Department of Commerce Division of Liquor Control is responsible for controlling the manufacture, distribution, licensing, regulation, and merchandising of beer, wine, mixed beverages, and spirituous liquor as the law is outlined in the Ohio Revised Code Chapters 4301. and 4303.

The Division of Liquor Control regulatory function is based in our permitting process. Annual licensing is required for businesses that provide alcoholic beverages for consumption as a manufacturer, distributor or retailer, and in some cases an event promoter. In some cases, the numbers of permits issued (also known as licenses) are limited by quota based on the population of the area. In all cases, local community input is encouraged and considered during permitting and renewal of permits. The Division works with local law enforcement and the Department of Public Safety Investigative Unit to ensure compliance with Ohio law.